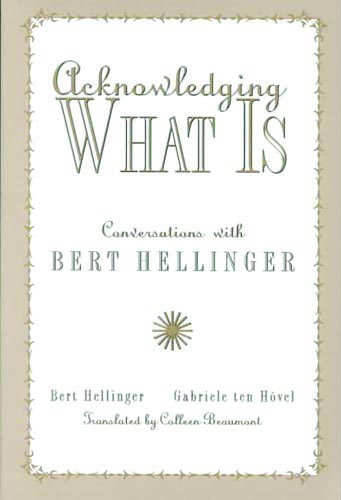 Considered one of the most innovative psychotherapists in the world today, Bert Hellinger has garnered the attention of the international therapy community, as well as the segment of the lay community interested in recovering sources of healing and wholeness. In Acknowledging What Is, Hellinger sheds light on his unique use of family constellations to reveal hidden – often destructive – family dynamics and to activate healing resources. Hellinger also speaks freely and frankly about his observations of the forces at work in family systems and the controversy that surrounds some of those observations.

In this probing interview, Gabriele ten Hovel brings to her conversations with Bert Hellinger a journalist’s skepticism. In her voice is the sense of wonderment that many may have who do not understand how such an approach can work or who have only heard about statements attributed to Hellinger. And there are times when we hold our breath, poised to be outraged by his answers and explanations. Instead, the tough questions are met by equally tough answers – and in the spaces between question and answer the formidable power of the family constellation begins to unfold.

This book provides an opportunity for Bert Hellinger to lay to rest some misunderstandings, to clarify his thinking on entanglement and resolution, to describe what he means by the “movements of the soul.”

In the end, though, the book also provides an opportunity for readers to open their hearts and minds to the power of the family constellation. Born out of the most humble therapeutic stance, that of respectful observation, this approach makes contact with the deepest levels of family engagement and disengagement.

Sit in as the logical minded journalist and the “caretaker of the soul” consider the human condition together. You may take away little gems or find that your perspective goes through a major shift – either way, these “conversations with Bert Hellinger” will energize your thinking.

Described as the ultimate empiricist, Bert Hellinger acknowledges several important influences on his life and work: his parents, whose faith immunized him against accepting Hitler’s National Socialism; his 25 years as a priest, particularly as a missionary to the Zulu; and his participation in interracial, ecumenical training in group dynamics. However, it was in Hellinger’s later training in family therapy that he first encountered the family constellations that have become the hallmark of his therapeutic work.