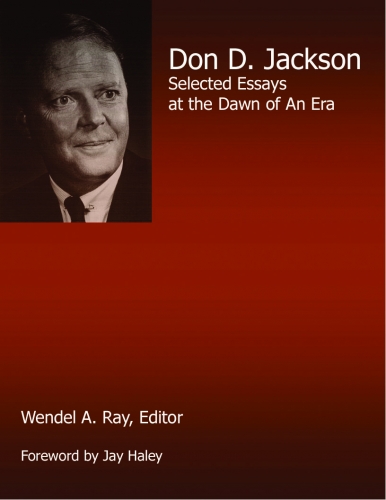 Don D. Jackson: Selected Essays at the Dawn of an Era

Imagine contemporary art without Picasso, mathematics without Newton, theater without Shakespeare, psychology without Freud … We chug along in our given areas and then one day someone steps in to show us something different, something entirely new. We usually resist it at first, but eventually that radical perspective is subsumed into the movement as if it had always been there. Don D. Jackson was such a pioneer. He galvanized the field of family therapy when individual therapy was the norm. He fostered the development of brief therapy in a world where long-term therapy was the standard. He made significant contributions to the treatment of schizophrenia when most viewed the problem as hopeless. Yes, this book, skillfully edited by Wendel Ray, provides the opportunity for readers to immerse themselves in Jackson’s contributions.

More important, however, it reveals the story behind many of the major contemporary trends in the field. At the time of his death, Jackson was poised to lead the human sciences from the then-prevalent view of the individual in isolation to one that encompasses the interconnectedness of humanity and the essential relationship of behavior to context. Although he did not have the chance to forge that paradigmatic shift, the seeds he planted did take root, as is evidenced in the work of so many current experts. These rare chapters offer a detailed portrait of Jackson and his work, and Wendel Ray has provided insightful introductions to frame the three sections into which the papers are divided: Early Clinical Observations, Defining an Interactional Theory of Human Relationships, and Research Into the Nature of Human Interaction.

Don Jackson’s intellectual prowess, teaching charisma, and refusal to blindly adhere to the status quo are all apparent in these writings. Get to know Don Jackson and we get to know a man who profoundly influenced the human sciences. In looking back at his work, we not only shed light on the nature of the field as it is today but we recapture the spark of passion and imagination that could very well revitalize the clinical work we do tomorrow.