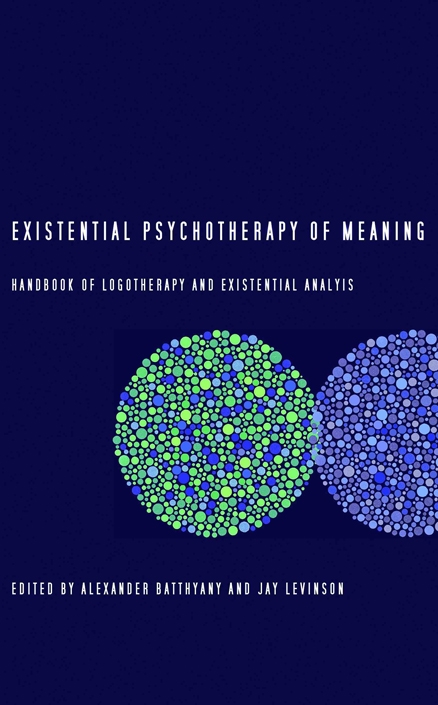 Written by an international assembly of leading exponents of existential psychotherapy and related disciplines, this book includes thirty chapters on current trends and topics in Logotherapy and Existential Analysis. It provides readers with an up-to-date and well-integrated text that will enhance the knowledge and skills of everyone who in one way or another applies meaning-oriented and person-centered psychotherapy and counseling in his or her professional and/or personal life. In keeping with Logotherapy’s tradition of interdisciplinarity, the research gathered in this volume comes from a variety of sources and disciplines, including medicine, psychiatry, psychology (both clinical and theoretical), counseling, nursing, and philosophy.

As Jay I. Levinson, Ph.D., former Special Assistant to Viktor E. Frankl, and co-editor of this essential new volume, says in his foreword, “It was always Frankl’s wish … that he not be seen as the great ‘guru,’ meaning the only and/or ultimate authority on existential psychiatry. Rather, Frankl encouraged others to build on his theories, expand the literature and further serve humankind.” Thus, the 30 chapters contained here allow readers access not only to the contributions of Viktor Frankl but to the grand extrapolations that have been made by those who have learned from him. Like a force of nature, the Logotherapy paradigm shows us the vision in its roots and the core in its branches.

The specific and the general dovetail to clarify the philosophical basis and clinical applications of Frankl’s Logotherapy, as well as possible future directions.

Alexander Batthyany, Ph.D. teaches Philosophy and Theory of Cognitive Science at the University of Vienna, and Logotherapy and Existential Analysis at the Department of Psychiatry at Vienna Medical School. In addition to his role as chair of the Science and Research Department of the Viktor Frankl Institute in Vienna, Batthyany is together with Dr. Eleonore Franklresponsible for the Private Archives of Viktor Frankl. He is principal editor of the 14-volume edition of the Gesammelte Werke von Viktor Frankl (Collected Works of Viktor Frankl) and, in collaboration with Péter Sárkány, is editor of the first Hungarian book series on logotherapy and meaning-oriented, existential psychology and psychiatry. Batthyany has published several books and articles and lectures widely on philosophical psychology, contemporary philosophy of mind, and logotherapy and existential analysis.

Jay I. Levinson, Ph.D. is a licensed psychologist in private practice in Baltimore, MD,. Dr. Levinson has lectured internationally and served on the faculties of both the Johns Hopkins University and the University of Maryland School of Medicine. He is the only person to publish research integrating the theories of Dr. Viktor Frankl (meaning in life) and Dr. Elisabeth Kubler-Ross (meaning in death). Dr. Levinson served as a Special Assistant, colleague and friend to Dr. Frankl for over 20 years and edited his most recent book, Man’s Search for Ultimate Meaning. In an effort to give of himself to the community, Dr. Levinson has worked for many charitable foundations. He is a member of the Board of Directors of the Viktor Frankl Institute of Logotherapy and is the founder of the Baltimore Ronald McDonald House.