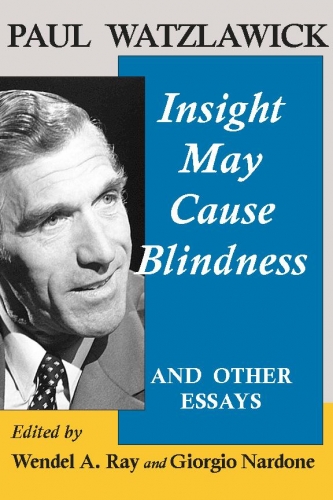 Paul Watzlawick Insight May Cause Blindness and Other Essays

Paul Watzlawick is among the best known figures in the fields of communication and constructivist theory, family and brief therapy. A Senior Research Fellow at the Mental Research Institute (MRI) and founding member of the MRI Brief Therapy Center team, he was Clinical Professor Emeritus at Stanford University School of Medicine Department of Psychiatry and Behavioral Sciences. Dr. Watzlawick’s contributions to the Interactional View of human behavior are profound, many, and among the most influential and widely read.

Born in 1921, Watzlawick studied philosophy and philology at the Università Ca’ Foscari Venice and earned a doctorate degree in 1949. He then studied at the Carl Jung Institute in Zurich, where he received a degree in analytical psychotherapy in 1954. In 1957 he continued his researching career at the University of El Salvador. In 1960, Don. D. Jackson arranged for him to come to Palo Alto to do research at the Mental Research Institute (MRI). In 1967 and thereafter he taught psychiatry at Stanford University. Watzlawick followed in the footsteps of Gregory Bateson and the research team (Don D. Jackson, John Weakland, Jay Haley) responsible for introducing what became known as the “double bind” theory of schizophrenia. Watzlawick’s 1967 work based on Bateson’s thinking, Pragmatics of Human Communication (with Don Jackson and Janet Beavin), became a cornerstone work of communication theory. Other scientific contributions include works on radical constructivism and most importantly his theory on communication. He was active in the field of family therapy.