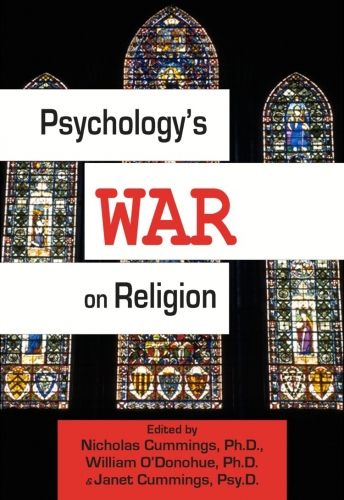 Psychology attempts to deify “science” as a secular substitute for religion, according to the authors of Psychology’s War on Religion edited by Cummings, O’Donohue and Cummings. The current growing conflicts between evidenced- based treatments versus faith- based counseling is just one example of this. Readers will be energized by the re-examination of the intolerance of science toward faith-based values that drive our secular society. Issues of abortion, homosexuality, status of women, gay rights, bioethics of stem-cell research, ethical absolutism versus ethical relativism, and “scientism” (scientific moralism) all come under scrutiny. The authors discuss the hypocrisy of viewing debates over conflicting research data as unbiased intellectual freedom and considering debates over legal, social and political issues derived from religious teachings as expressions of prejudice. This book challenges one’s value system and revitalizes the reader with fresh thinking.
— Jack G. Wiggins, Ph.D., Psy.D. A former President of APA and Gold Medal Award Winner for Lifetime Achievements in Practice by the American Psychological Foundation

If you truly believe in respect for diversity and in the fuller utilization of patients’ resources to promote health, this book will give you much to consider. Poll after poll reveals that 90% of Americans believe in God, and it behooves psychology not to alienate those we are committed to serve, but to respect and utilize this force in the healing process.
— Michael F. Hoyt, Ph.D., author of Brief Psychotherapies: Principles and Practices, Some Stories Are Better than Others, and The Present is a Gift

“Fascinating” “Infuriating” “Enlightening” “Exasperating”—whatever words you use to describe this book, “boring” won’t be one of them. In 12 chapters, the editors and their contributors reveal that not only is there an overt bias toward the religious within the APA, but often there is outright hostility.