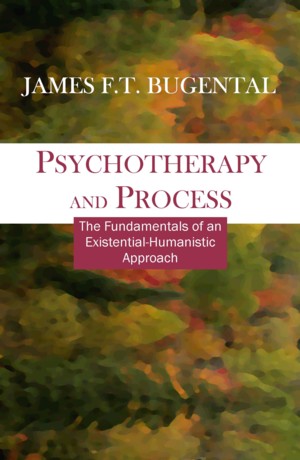 Psychotherapy and Process - The Fundamentals of an Existential-Humanistic Approach

“This book takes you on a wonderful adventure through the process of psychotherapy, both from the side of the client and the therapist. Although it has brief moments of academic flavor, it is mostly engaging and interesting no matter from where you approach it. Bugental shares his own experience as a therapist and discusses a view on human potential that is beautiful, moving, and inspiring. I highly recommend this book for an enjoyable read (nonfiction) and for insight on what psychotherapy can be.”

JAMES F. T. BUGENTAL was a leading psychotherapist and a founding father, with Abraham Maslow and others, of humanistic psychology or “the third force” (in contrast to psychoanalysis and behaviorism). He was also the creator, along with Rollo May, of existential-humanistic psychotherapy. Bugental  earned his doctorate from the Ohio State University in 1948 where he was influenced by Victor Raimy and George Kelly.  After a brief time on the University of California, Los Angeles faculty in psychology, Bugental resigned in 1953 to found the first group practice of psychotherapy, Psychological Service Associates, with Alvin Lasko. The group added Tom Greening in 1958, and subsequently Gerard Haigh, Bill Zielonka, Harris Monosoff, and others. A men’s encounter group evolved from this core, which included Jim Clark, Bob Tannenbaum, and Art Shedlin from UCLA, and this group continued meeting for decades until 2006.